Cher told Ellen DeGeneres she is just as scared of Chaz Bono’s dancing as she was of his gender reassignment surgery. 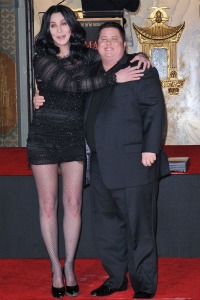 Cher is a total tiger defending her cub! She has already spoken out in defense of her child Chaz Bono competing on Dancing with the Stars despite a small (and misguided) outcry that his participation could cause other kids to experience gender dysphoria. Now she’s telling Ellen DeGeneres even more.

Cher called into the show while Chaz was chatting with Ellen to talk about the hostility and fear her now-son is facing.

“If you got that excess time and that amount of hostility, I’m not so sure that I can say anything to you that would make you change your feelings,” she said of the people who threatened to boycott the show over Chaz.

“Because you know those are such feelings of hostility and fear, that I don’t know that I would have any magic words to make you feel more comfortable and to soothe you into not being terrified of my child dancing on Dancing with the [expletive] Stars.”

Chaz Bono underwent gender reassignment surgery after a lifetime of struggling with both his sexuality and his identity — a journey which was captured on camera in the documentary miniseries Becoming Chaz.

There’s one thing that scares Cher more than Chaz’s surgery, by the way: the Quickstep.

“I got to tell you something,” Cher said to Chaz, “You doing this dance is about as scary as you making the ‘change.'”

Hopefully the recovery will be a little easier!

Watch Chaz Bono compete on the season premiere of Dancing with the Stars Sept. 19.