The Secret Circle premiere countdown is on. Are you ready to lose control? No really, keep reading to see TSC video called Lose Control. 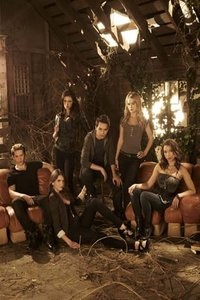 The Secret Circle: One more week and the wait is over. Will it be worth it — oh yeah, we’re pretty sure it will be.

The CW began rolling out its fall premieres this week and they’re on a roll. Whether you were getting mysterious with Ringer last night or waiting for H8R tonight (Sept. 14), there is something for everyone — but we can barely contain our witchy excitement for tomorrow night and the premiere of The Secret Circle.

Ringer review: Love it or leave it?>>

To get you up to speed if you haven’t been following our coverage — let’s face it, we know you have — The Secret Circle features Cassie’s (Britt Robertson) struggles as she realizes she’s the key to a battle between good and evil.

Add in the complication of the cute boy (Adam) who becomes drawn to Cassie, the creepy father (Charles Meade) who has his eye on the “Circle” and then the unpredictable Faye and you’ve got yourself a show.

TSC comes from The Vampire Diaries creator Kevin Williamson and is already growing a fan base before the premiere has even dropped.

Tune in tomorrow (Thursday, Sept. 15) to catch the premiere following the The Vampire Diaries. Don’t forget to also check back here tomorrow morning for a full episode preview of what to expect from tomorrow’s debut.

Will you be tuning into The Secret Circle?

read on for more the secret circle news