SheKnows has been bringing you all the latest news leading up to Sarah Michelle Gellar’s Tuesday night Ringer debut and now it’s time to weigh in — love it or leave it?

CW’s Ringer — Now that you’ve watched, will you stick it out? 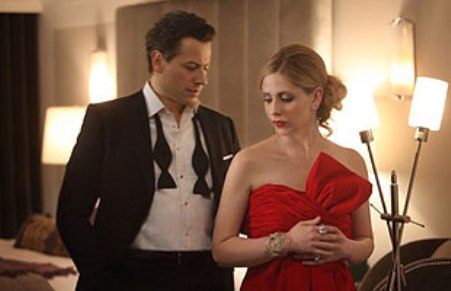 Before we give you our take on the Ringer premiere and the return of Sarah Michelle Gellar, we feel we should warn you right away — in case you didn’t already get the memo — this is not a rinse and repeat version of Buffy.

If you need a quick refresher, here’s what went down…

Bridget (Sarah Michelle Gellar), a recovering addict, is a witness to a horrific crime and manages to escape the FBI before she can testify — or in her mind, get whacked by the bad guys.

Cue the troubled girl on the run from unsavory types who want to eliminate her “all-knowing eyes.”

Unlike Bridget, Siobhan is a high class lady with a gorgeous husband (Ioan Gruffudd) and luxurious lifestyle — at least that’s what it seems.

Here’s where the switch comes in. Siobhan goes missing after Bridget falls asleep during their boat ride (insert strategically placed pill bottle with a diamond ring inside/suicide), so Bridget quickly steps into her life in order to protect her own.

Suddenly, Bridget is thrust into dealing with an icy marriage and Siobhan’s affair with her best friend’s husband. Add in the drama of her sponsor Malcom (Mike Colter) and it’s quite the mess she’s gotten herself into — but a mess that might keep her safe — for now.

The pilot had a lot to set up, in very little time. Sarah Michelle Gellar did a nice job in creating a contrast to her characters — besides wardrobe changes.

We will say this: if you blinked, you probably missed something.

While at times we missed a few beats due to processing another piece of the puzzle, we got just enough time to regroup until the next nugget of info needed to be stored for later.

Ringer is not one of those shows you get immediate payoff from — and we mean that in the most positive of ways.

The pilot laid the ground work to start setting off small payoffs as the story builds. Whether it builds to a full crescendo, will have to be seen with time.

As for the return of Sarah Michelle Gellar, her approach to both characters is a refined one that will allow the Buffy generation to fall in love with SMG all over again.

That said, we’re waiting for the kick-ass warrior to show up and we have no doubt she will.

Gellar did reveal she got to play with some dangerous toys during the shooting of the show — game on, people!

What did you think of the premiere of Ringer — Love it or leave it?