How I Met Your Mother returns Monday with a one-hour episode and SheKnows has two hot clips from the premiere. The action picks up right where we left off last season — Barney’s wedding! Will Barney say I do? Will Robin come clean about her feelings? And what’s with that dance?

In the How I Met Your Mother seventh season premiere The Best Man, Barney (Neil Patrick Harris) prepares for his wedding day — and no, Robin is NOT the bride. With the big day upon them, Barney and Ted (Josh Radnor) reminisce about their pal Punchy’s wedding, where Marshall (Jason Segel) and Lily (Alyson Hannigan) dropped their baby bombshell and Barney shared one groovy dance with Robin (see clip below). 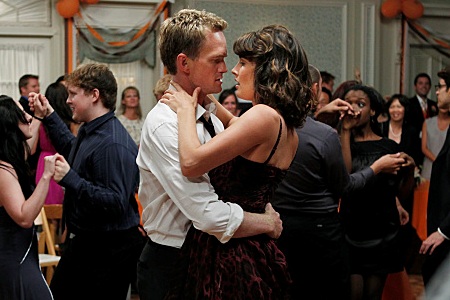 It seems the boys’ recap will bring fans up to speed on what’s gone down since last season’s finale, but one thing remains the same: Robin still has feelings for her ex, Barney. That dance — and whatever went down after it! — couldn’t have helped. With Barney set to get married, will she fess up?

As seen in the second clip below, Barney is also hit by a case of cold feet, but that’s to be expected. In typical HIMYM fashion, however, the one hour episodes may not answer the Barney-Robin question. In fact, it’s not likely to.

Whether or not Robin makes a move in the premiere, there’s another man heading her way later in this season: Kal Penn is coming to How I Met Your Mother, and rumor has it, he’ll set his sights on Robin… but that’s a ways off.

How I Met Your Mother returns to CBS Monday, Sept 19 at 8pm. In the first clip, Barney and Robin do a dance of love at a friend’s wedding, proving The Groove is in the Heart for these two. In the second clip, Barney gets a case of cold feet.