Today is the 15th anniversary of Tupac Shakur’s murder in Las Vegas. Let’s remember him with some of his best hits. 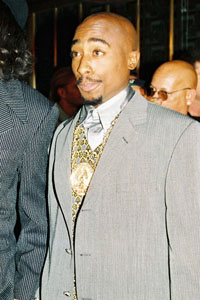 Rapper Tupac Shakur was gunned down in Las Vegas on Sept. 7, 1996 and died on Sept. 13  — a full 15 years ago today. It’s hard to believe that so much time has passed since Pac’s death, especially since we’ve heard plenty of the rapper’s unreleased recordings over the years.

The self-proclaimed ‘Rebel of the Underground’ always found a way to push the envelope in his music while sending a clear message on social justice in his lyrics.

“I’m the rebel totally going against the grain… I always want to do the extreme. I want to get as many people looking as possible,” Shakur said in a 1991 interview.

We see 2Pac’s influences in a number of today’s hip hop artists, including Lil Wayne. We still have our favorite Tupac songs and videos — though it might date us a bit!

It wasn’t a party in the late ’90s or early ’00s until Dr. Dre’s collaboration with Tupac Shakur played. It’s still on our workout playlists.

Tupac wasn’t exactly an angel — he was arrested several times for battery and even spent some time in prison for rape. His mother stuck by his side through it all — and this song was his ode of thanks to the person who raised him.

Sampled off of Bruce Hornsby’s That’s Just the Way It Is, Changes is Pac’s commentary on social issues including drug use and poverty. Still rings true today, sadly.

What is your favorite Tupac Shakur song?

Read on for more Tupac Shakur