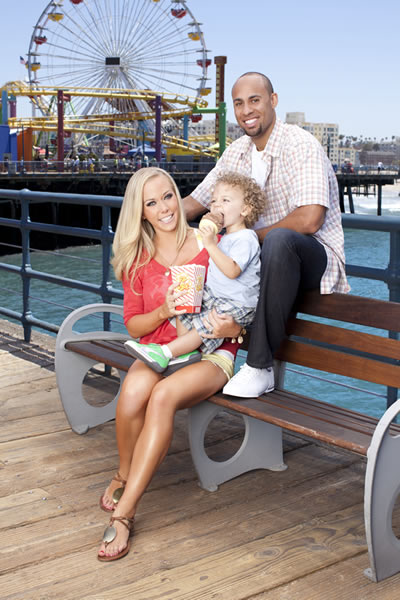 Kendra and Hank are still in family mode, but are not leaving their careers behind.

“This season is different because we finally found balance,” says Kendra of Season 4 of her hit show. “We have a home base now.”

This year, Kendra and husband Hank Baskett move back to Los Angeles from Minnesota after Hank’s contract with the Vikings is not renewed.

Now that they’re settled in, Kendra says they have time to focus on building their family.

“We’re really ready for it,” says Kendra of having another baby. She gave birth to her first child Hank IV in 2009.

“That’s why I wore this hot jumper tonight (motioning to her outfit).I want to knock out some hot pictures before I get pregnant again.

While they wait for baby number two, Kendra is busying herself with redecorating her new abode.

“We’re actually re-doing our home so you get a little HGTV on my show along with parenting, drama, and everything else,” says Kendra. “We’re not afraid to share our lives with the world.”

One aspect of their lives that is sure to cause some commotion is Hank being temporarily out of work.

“We’re dealing with Hank out of a job,” Kendra tells SheKnows. “We don’t know [whether he’ll play football again]. It’s what everybody has to go through. If Hank’s out of a job, then I have to step it up and work more.”

Luckily, Hank is not the freeloading type.

“Hank’s been doing good; he’s a businessman,” says Kendra. “He got a degree in business so he’s using that a lot right now. I’m proud of him for not just sitting around at home playing video games.”

Be sure to catch the episodes of Kendra on E!

Kendra tries her hand at home improvement. Get a glimpse here. >>