Sporting a black eye and gash on her head, Reese Witherspoon was seen out for the first time since being hit by a car while out jogging.

Reese Witherspoon has a black eye and bandage over her forehead after being hit by the car of an 84 year-old woman while out jogging in Santa Monica last week. 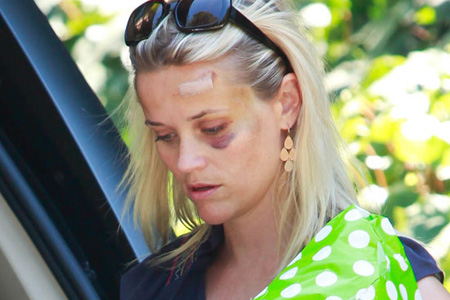 Wearing a black top with sunglasses on her head to reveal her injuries, Witherspoon was seen chatting with a friend before going to a birthday party with a friend in Los Angeles yesterday.

Witherspoon was briefly hospitalized last Wednesday when a car hit her while she was crossing the street during a jog. She was released after being treated for a head gash, and was “really frightened” by the whole accident.

In fact, sources tell Us Weekly that Witherspoon has always been worried about being hit by a car. “She is always the first person to pull people away from the edge of the curb because she doesn’t want them being accidentally hit.”

Luckily, Witherspoon is recovering well – and is apparently not holding a grudge against the elderly woman that hit her. She is not pressing charges against the woman, however police did charge the driver with a moving violation and she must re-take her driver’s test.