Why does Kate Winslet say she will never do another nude scene, yet she keeps doing them? The actress opens up to V magazine about being a “hypocrite” and baring all onscreen.

Kate Winslet has worked with some of the hottest actors in Hollywood, including Leonardo DeCaprio, and Johnny Depp, and has had some steamy love scenes, but insists they are no fun to film. Sure, we can image that kissing Leo is no fun — which is why she gets paid millions of dollars to do it. 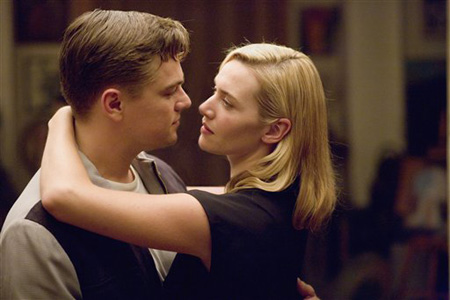 “As actors you talk about it all the time,” she tells V magazine. “You can literally be tangled in sheets, and you turn to the other actor and say, ‘What the (expletive) are we doing?’ Dear Mum, at work today I had so-and-so’s left nut sack pressed against my cheek. It’s sort of unethical if you think about it in those terms.”

In fact, Winslet said she once vowed she would never do another nude scene, but ended up filming another. In fact, she recently bared it all for Mildred Pierce.

“It definitely makes me the hypocrite of the decade,” she reveals. “I’m just going to stop saying it.”

“I hate it! Listen, make no mistake, I just get on it. I just go in and say ‘Oh (expletive)’ let’s do it,’ and boom!”she says. “If you complain about it or procrastinate it’s not going to go away. It’s a profoundly bizarre thing to do,” she insists.

Hate it or not, the actress won an Academy Award in 2008 for her steamy role in The Reader.

Why does she keep choosing sexy roles? “I hope I am (expletive)-ing myself over the characters I play for the rest of my life, because the day I go, ‘Oh yeah, that’s going to be a piece of pie’, why (expletive) bother? If you do that, you do not learn.”