Christina Hendricks let her cleavage do the talking at the New York premiere of I Don’t Know How She Does It. What do you think of her sexy look? 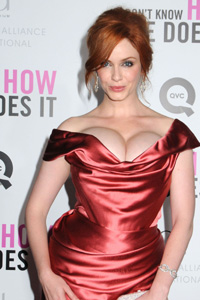 If you’ve got it, flaunt it! Christina Hendricks bares her famous cleavage at the premiere of I Don’t Know How She Does It in a rose-colored satin Vivienne Westwood gown. How does she do it, you ask? With a supportive bra, I’m sure!

She accessorized her figure-hugging gown with Katerina Maxine jewelry, including a white gold bracelet ($16,400), and earrings ($12,400) – and her breasts, which, according to her, she paid nothing for as they are all natural.

“It’s so bizarre that people are constantly asking if my breasts are real or fake,” she tells The Daily Mail “They’re so obviously real that anyone who’s ever seen or touched a breast would know.”

The Mad Men star plays Sarah Jessica Parker’s best friend in the movie that’s about working moms trying to balance it all. What’s next for the sexy starlet? She is appearing in the Danish director Nicolas Winding Refn directed movie, Drive, co-starring Ryan Gosling — and also would love to be Wonder Woman. Director Refn has said he wants to make a movie based on the famous comic and would love for Hendricks to play the lead.

“I grew up on the TV show, and I had Wonder Woman underoos, and my brother had a Wonder Woman doll — sorry, Aaron, you’re exposed,” Hendricks joked to Vulture magazine. “And Nicolas said, when we were on set, ‘I want you to be Wonder Woman.’ And I think he is such an extraordinary and exceptional director, that if he asked me to do it, I would do it in a heartbeat.”

Tell us: What do you think of Christina Hendrick’s cleavage-baring dress?