Rock legend Paul McCartney will be honored as a MusiCares person of the year during Grammy week, 2012. This honor is given to a musician who gives back to his or her community through philanthropic efforts.

Paul McCartney joins music legends such as Aretha Franklin, Barbara Streisand and Neil Diamond in being honored by MusiCares, an organization who helps musicians who are struggling due to financial, medical or other reasons. 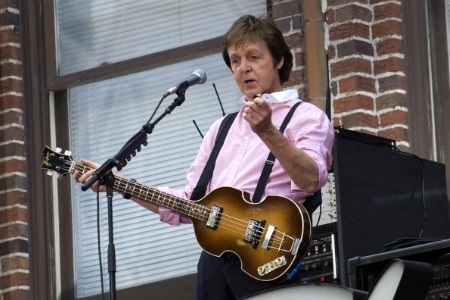 The former Beatle will be honored for his music and for his work throughout the years with various charitable 0rganizations.

Did you catch McCartney documentary The Love You Make on Showtime this weekend? Read about it here>>

During this annual event, music stars of past and present fete the honoree through singing their songs and talking about their good works. Many times, the honoree performs as well.

Past recipients of the award have included Aretha Franklin, Barbra Streisand and Neil Diamond.

The awards will be presented in Los Angeles during Grammy week, 2012.

MusiCares provides assistance to artists who are struggling with different issues. Their services and resources cover a wide range of financial, medical and personal emergencies, and each instance is treated with complete confidentiality.

Paul McCartney is known as the most successful composer and musician in popular music history, according to the Guiness Book of World Records. BBC News Online readers named him the greatest composer of the millenium and BBC News cited his song, Yesterday, as the most covered song in music history, with over 2,200 artists attempting to make his song their own.

He most recently made news on two different levels. One for proposing to longtime girlfriend Nancy Shevell with a whopping $650,000 engagement ring and on the other, for being another in a long line of British celebrities whose phone was once hacked by the intrusive British media.

He is also an advocate for several worldwide issues, including the campaign against landmines (once a personal favorite charity of the late Princess Diana). McCartney is a stalwart vegetarian and revealed in an interview with Prospect Magazine that he once tried to convince the Dalai Lama to stop eating meat. He revealed, “Forgive me for pointing this out, but if you eat animals then there is some suffering somewhere along the line.” The Dalai Lama replied to Sir Paul by stating that his doctors advised him to eat meat for health reasons. McCartney’s response, “I wrote back saying they were wrong.”