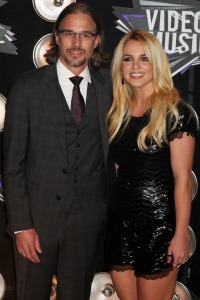 Is Britney Spears set to walk down the aisle for a third time? Sources spotted her boyfriend Jason Trawick at a high-end jewelry store Monday.

Spies told X17 that Trawick showed up at the Mouawad showroom around 1:00 and chatted with jeweler Pascal Mouaward for over an hour.

So is Britney planning wedding number three? Not so fast, says her rep.

“There is no truth to that report with regards to engagement rings,” corrected Britney’s publicist Jeff Raymond.

“However, Jason was there to discuss other matters with Pascal, but nothing relating to him personally.”

Hey, at least this time Brit won’t have to buy her own engagement ring like she did when she married Kevin Federline. Trawick is a highly successful agent in his own right and while he might not have Britney-level money, he does just fine — fine enough to buy her the ring of her dreams, anyway.

In addition to KFed, with whom she has two sons, Sean Preston and Jayden, Britney also enjoyed a short-lived quicky marriage to childhood friend Jason Alexander during a weekend bender in Vegas. Speaking of Kevin Federline, he just added to his brood — his girlfriend Victoria Prince recently gave birth to a baby girl.