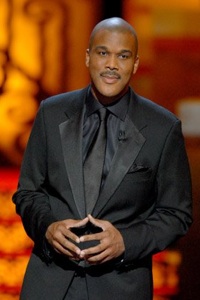 Tyler Perry has capped off another successful year with a distinct honor. His hard work and multi-faceted career has earned him the number one spot on Forbes Magazine’s highest paid men in entertainment list.

The magazine claims that Perry brought in an estimated $130 million from May 2010-2011. Considering the success of his films Madea’s Big Happy Family, For Colored Girls and his TBS series Meet the Browns, we’re not surprised by the number. Over the past year, he also extended his distribution deal with Lionsgate and managed to land the title role in the highly anticipated feature I, Alex Cross.

Despite the underwhelming performance of 2010’s Prince of Persia: Sands of Time and The Sorcerer’s Apprentice, producer Jerry Bruckheimer managed to snag the number two spot with $113 million. He quickly rebounded earlier this year with Pirates of the Caribbean: On Stranger Tides, which grossed over $1 billion worldwide.

Overall, the Forbes list mostly consists of producers, directors, hosts, musicians and a few sports stars. But lucky Leonardo DiCaprio is the only thespian to make the list based on his acting credits alone. He brought in major bank in 2010 ($77 million) thanks to hits like Shutter Island and Best Picture Nominee Inception.

Check out Forbes’ complete top 10 below: