Ryan O’Neal claims he dropped out of Dancing with the Stars because he hates Nancy Grace. 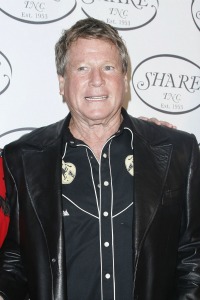 As one of the more polarizing media figures on television today, Nancy Grace alternately inspires the love and ire of millions. You can count Ryan O’Neal in the latter category.

Ryan O’Neal says he was supposed to be a contestant on this season of Dancing with the Stars, and while he claims he backed out because of his bum knee, show sources say it was really because he can’t stand Nancy Grace.

People connected with Dancing with the Stars told TMZ O’Neal feels Grace has gone after his troubled son Redmond O’Neal and blamed the kid’s drug problems on dear ol’ dad. While some feel Grace has a valid argument there, O’Neal thinks she has been “disrespectful” to his family.

Nancy Grace denies she said any such thing, telling the website, “We have never covered Mr. O’Neal nor his family on our show.”

“I hate that he dropped out of DWTS; I would have loved to compete with him and wish him the very best.”

Ryan and Redmond O’Neal were arrested together in 2008 after cops found drugs in the actor’s Malibu beach house. Redmond has been in and out of jail and rehab ever since, with his most recent drug arrest sending him back to an in-patient drug program.

Watch Nancy Grace and the rest of the cast trip the light fantastic when the new season of Dancing with the Stars premieres on Sept. 19.

read on for more dancing with the Stars

Chaz Bono on Dancing with the Stars: Gender dysphoria is not catching