Alexander Skarsgard is out promoting Straw Dogs and the press tour means a whole lot of getting personal. From losing his virginity in eight seconds to his drunk grandma, the True Blood star isn’t holding back! 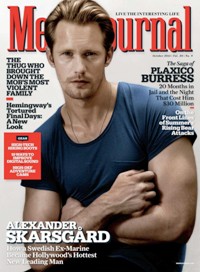 Alexander Skarsgard may have a sexy and serious image in his role as Eric Northman in True Blood, but the 35-year-old isn’t afraid to make a joke. What else can you do when a magazine interview gets a little too personal?

Men’s Journal, with Alexander Skarsgard on the cover for the Oct. issue, asked the actor about losing his virginity. Rather than refuse to answer he quipped, “That was 2008, I think. Best eight seconds of my life.”

On being named Sweden’s Sexiest Man for five consecutive years the Swedish born actor jokes, “Every single day, I wake up and look in the mirror and think, ‘Five times, mother–[expletive]. Five times.'”

Yet while the press are happy to focus on Alexander Skarsgard’s smoking good looks he hopes that isn’t all he’ll be known for. “You tend to get a lot of offers that are, like, the hot guy,” he said. “And those parts aren’t very fun. I hope there’s something more to me than my pecs.”

Certainly Alexander Skarsgard’s Monday night appearance on Jimmy Fallon to promote his upcoming film Straw Dogs helped to round out his image. Does it get more endearing than taking your 82-year-old grandmother out for drinks every afternoon?

Along with speaking for a bit in his Swedish accent the actor tells Jimmy Fallon his grandmother rules the family. “She runs the clan with an iron fist,” he shares. “My whole extended family basically lives within five blocks of each other. And every day at one o’clock we roll Grandma out to the square.”

Watch — then tell us if what you think of Alexander Skarsgard’s accent. Love it? Prefer him without it?