Move over Dreamgirls, there’s another Supremes inspired musical heading our way. Jordin Sparks and Mike Epps are set to star in a remake of the 1976 film, Sparkle. 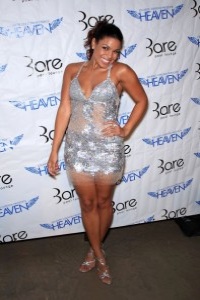 Hollywood needs a little razzle dazzle and American Idol winner Jordin Sparks is going to give it to them! The singer has landed the title role in the revamped musical Sparkle opposite Mike Epps and possibly Whitney Houston.

The film follows the rise of the Williams sisters from their humble beginnings in the church choir to national fame. The Hollywood Reporter claims that Houston is in talks to play Sparkle’s “not-so encouraging mother,” while Epps will star as the stand up comedian (fitting) Satin, who marries one of the sisters and gets her hooked on drugs.

If Houston accepts the matriarch role, it will be her first acting gig since the 1997  made for TV movie, Cinderella. She made her film debut almost 20 years ago with the 1992 hit The Bodyguard, which was accompanied by a hugely successful soundtrack led by her single “I Will Always Love You.”

The original Sparkle features Irene Cara (Fame) as the title character, Mary Alice and Tony King. Houston was originally set to produce the remake years ago with late songstress Aaliyah in the lead role.

Sparkle will mark singer Jordin Sparks’ feature film debut. She previously won the sixth season of American Idol, which was followed by the release of her chart-topping duet “No Air” with Chris Brown.

Do you think Sparkle could be as critically and commercially successful as Dreamgirls?