Justin Bieber wants marriage and children by the age of 25. 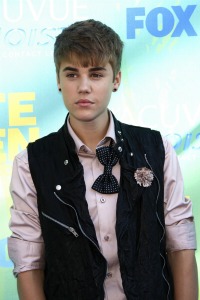 Justin Bieber has a plan for how he wants his life to be by the time he hits his quarter-life crisis — and it differs wildly from Taylor Lautner’s career-focused goals.

The Biebs says he plans to have achieved all his showbiz goals by his mid-twenties so he can settle down and have mini-Biebs.

“I want to be a young dad. I want to be able to have done what I wanted to do — to be successful, to do a movie or whatever.”

Bieber knows something about young parents: His dad was only 19 years old when he was born and his mom just 18. The couple split just two years later.

But Selena Gomez shouldn’t start picking out diamond rings and baby names just yet. While Bieber confirms that “She’s my girlfriend right now,” he also says whatever lucky lady winds up combing his famous tresses for life will have to wait it out.

“I’m not looking to get married now,” Bieber clarified.

Selena Gomez publicly confirmed her relationship with Justin Bieber in Feb. 2011, but rumors the cute pair were a hot and heavy couple had been floating around for months prior. “I’ve been best friends with him for a very long time,” she said.