In a stunning upset over hometown favorite Miss Brazil, the Miss Universe crown was captured by Miss Angola tonight in a glittering pageant hosted in Sao Paulo, Brazil. 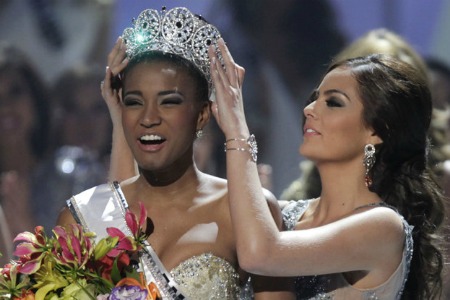 Miss Angola Leila Lopes won over judges Connie Chung, Dancing with the Stars winner Helio Castraneves and Isabeli Fontana with a thoughtful and empowering answer to her interview question: If she could change one thing about her appearance, what would it be?

“Thank God I’m very satisfied with the way God created me and I wouldn’t change a thing,” the 25-year-old beauty replied. “I consider myself a woman endowed with inner beauty. I have acquired many wonderful principles from my family and I intend to follow these for the rest of my life.”

Another thing Lopes had going for her? She kept her underwear on, unlike fellow contestant Catalina Robayo.

Lopes was one of 89 contestants from six continents competing for the most coveted crown in the pageant world. The first runner up was Miss Ukraine Olesia Stefanko, with home crowd favorite Miss Brazil Priscila Machado named second runner up.

“It was well deserved, we were cheering for her all along,” said fan Carolina Rocha. “Her smile and her friendliness was what set her apart from the others. She also answered her question very well, that likely helped her a lot.”