Bobbi Kristina, by birthright, has an audience at her fingertips. The 18-year-old daughter of Whitney Houston and Bobby Brown shared a little video cover of Adele and already near 150,000 fans have taken a listen!

Bobbi Kristina Brown is not your average 18-year-old with a soft spot for Adele songs. When the daughter of Whitney Houston and Bobby Brown shares an a capella cover of Someone Like You the world hits ‘play’ to hear her voice. 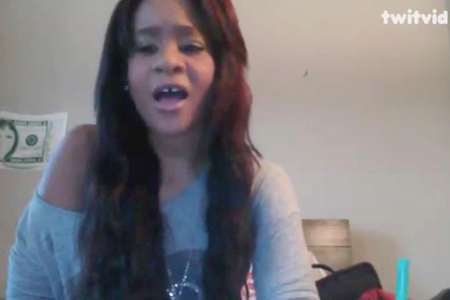 Can Bobbi Kristina belt it out like her mother, Whitney Houston? The verdict — remains out. Fans viewing the teen’s cover of Adele seem split between gushing with support or spewing a bit of Internet hate.

In response to the video of Bobbi Kristina singing from what looks to be her bedroom one commenter wrote, “Bobbi you can SING! You are the product of royalty but you have your own style & I’m feeling you.”

While another said bluntly,”Wouldnt even make it through the first set of auditions on Idol. And I cant understand how she can have that gap in her teeth…Wow…not being cruel…just shocked, but I guess if your parents smoke crack, why would they worry about what their kids’ teeth look like?”

Could Bobbi Kristina have known her bedroom cover of Adele would reach near 150,000 views, thus inviting both critique and commentary? With only 7,000 Twitter followers it’s hard to say if she could have known just how big her video would become.

Bobbi Kristina wrote Monday, “Good afternoon all ! Eeeek been hearing A LOT about that little tiny video I put up. . That was a joke, just wanted you all to hear me once. IF I keep singing, you ALLL will hear A LOT more from me. .WAYY BETTER, TRUST me. Hope the lover’s of the world are READY!”

We’re just happy to see her be in the headlines for something other than a drug scandal!

What do you think of Bobbi Kristina’s Adele cover?