Portia de Rossi and Ellen DeGeneres have created a new comedy that reportedly sparked a bidding war among networks! Find out all the details here, including which network landed the show. 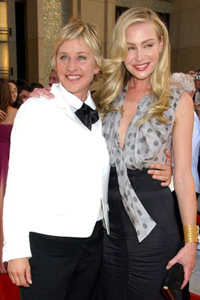 Portia de Rossi and Ellen DeGeneres are a wife-wife team to be reckoned with! The pair, who have been married since 2008, created a new sitcom about quarrelling sisters and networks were falling over themselves to get it.

NBC won out in the end and made a “put pilot commitment” on the show.

Rossi, who last appeared in the sitcoms Better Off Ted and Arrested Development, will play one of the dysfunctional sisters in the sitcom. DeGeneres reportedly has no plans to be in the show, staying on as executive producer through her production company A Very Good Production.

DeGeneres will also stay busy with Emmy-winning talk show The Ellen DeGeneres Show, which kicked off its ninth season this week.

This new sitcom, which will be written by co-creator of Samantha Who? Don Todd, remains unnamed –however it has created a nice buzz around it!