Nothing was off limits at the Comedy Central’s Charlie Sheen Roast – including his drug use, his bizarre behavior, his goddesses….and being replaced by Ashton Kutcher, of course. Check out the highlights and hilarious quotes from the Charlie Sheen roast.

Denise Richards and Ashton Kutcher may have skipped out on the fun, but Brooke Mueller,  Seth MacFarlane, William Shatner, Kate Walsh and more came together for the Comedy Central’s Charlie Sheen roast. 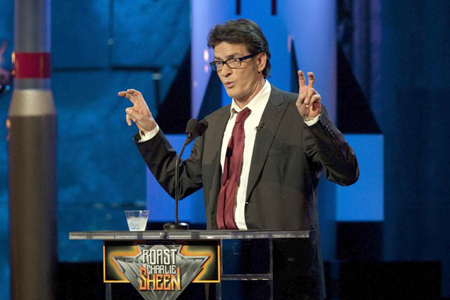 The roast was held at Sony Studios in Culver City and opened with Sheen sitting on stage surrounded by large missiles, in reference to his Violent Torpedo of Truth tour. Slash kept the crowd rocking as comedians came up on stage and took turn ripping into Sheen.

“How much blow can Charlie Sheen do?” began Jon Lovitz. “Enough to kill two and a half men.”

Amy Schumer got big laughs by comparing Charlie Sheen to Bruce Willis. “You were big in the ’80s, and now your old slot is being filled by Ashton Kutcher.“

Jeffrey Ross took the stage dressed as Moammar Kadafi. “Don’t you want to live to see your kids take their first 12 steps?” he joked. “How do you roast a meltdown?”

Sheen’s ex, Mueller, who has had her own battle with drugs and alcohol reportedly laughed throughout the roast.

“Charlie is an amazing medical specimen. I guess that’s what comes from waking up at the crack of crack,” joked Private Practice star Kate Walsh.

His brother, Emilio Estevez and his father, Martin Sheen, were not at the roast, but that didn’t stop them from being trashed.

Finally, it was Sheen’s turn to take the stage.

“Here beats an eternal flame. I just need to keep it away from a crack pipe,” he said, ending his roast.

An edited version of the Charlie Sheen roast will air on Comedy Central on September 19th – which happens to be the same night that the new Two and a Half Men (with replacement Ashton Kutcher) will also air. Coincidence? I think not.