Steven Soderbergh’s Contagion went viral to win the box office race for the weekend of Sept. 9. The Help held onto second place, while Warrior barely broke $5 million, Bucky Larson: Born to be a Star didn’t manage to break the top ten and Creature broke records with its bad showing. 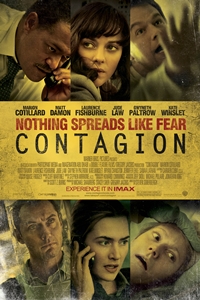 Contagion took the top spot this weekend with a respectable $23.1 million opening. With another good week, the film should easily recoup its $60 million budget, but it may do even better if moviegoers continue to spread the word.

The Help finally gave up the top spot, banking $8.7 million for second place. The weekend brings the film’s booty up to a hearty $137.1 million, passing The Smurfs for overall numbers stateside. Include international sales, of course, and that’s another story. The Help is a very American story and performed well at home, while The Smurfs took the world by storm, banking $457 million and counting.

Warrior didn’t have much of a one-two-punch, opening with a $5.6 million, which is less than half of The Fighters opening numbers. That said, Warrior got better buzz from moviegoers than Contagion did. Word of mouth could turn stars Tom Hardy, Nick Nolte and Joel Edgerton into next week’s comeback kids.

The Debt and Colombiana closed out the top five, with neither one breaking $5 million. Rise of the Planet of the Apes trailed right behind, bringing its total to $167.8 million domestic, $373.9 million worldwide. Shark Night 3D, Apollo 18, Our Idiot Brother and Spy Kids: All the Time in the World closed out the top ten, in that order.

The horror movie Creature scared up a painful $331,000 to open in twenty-ninth place. That’s the fifth lowest opening ever and factors out to fewer than six moviegoers per-showing. 2009’s Transylmania holds the title for worst opening for a film opening in 1,000 or more theaters, but if you do the math, Transylmania actually outperformed Creature. Ouch.

Next week’s new contenders include Sarah Jessica Parker’s I Don’t Know How She Does It, Ryan Gosling‘s Drive, Morgan Freeman‘s Dolphin Tale and the Straw Dogs reboot, along with a slew of limited releases.