Jessica Lowndes gives us the scoop on Season 4 of 90210, her single status, and what styles she’s looking forward to this fall. 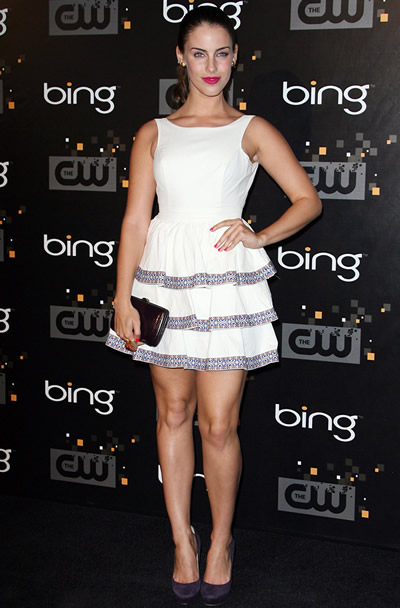 Jessica Lowndes looked fabulous as always as she walked the carpet at Bing Presents the CW Premiere Party this Saturday.

“My friend actually made this for me,” Jessica told SheKnows, pointing to her cupcake tiered frock. “Her name is Noelle and she is a designer in New York. Jimmy Choo shoes, Sergio Rossi purse, and Nicky Hilton ring…I’m kind of loving it.”

So are we! And since we can always rely on the 90210 gals to be sporting the latest trends, we asked Jessica what styles she’ll be sporting this fall.

“I’m loving the maxi skirt,” said Jessica. “I love it because it can go from spring to fall, and you just layer it with sweaters. I’m also loving the block colors with neon.”

On set though, the only thing Jessica will have to worry about around her waist is an apron.

She tells us that because her character, Adrianna Tate-Duncan, didn’t graduate high school with the rest of the cast, she’ll be working for tips this season.

“She’s a barmaid,” Jessica told SheKnows. “Liam lets Adrianna work as a waitress at his bar considering she didn’t go to college. It’s going good and she keeps doing all these kind acts, and slowly winning back everyone’s trust. She took a really dark turn last year. She’s definitely going to try to redeem herself.”

But just because she lost her popstar status, doesn’t mean we won’t be seeing Jessica/Adrianna hit the stage this year.

“This year Adrianna isn’t fame driven and she finds herself in a situation where she has to sing and she doesn’t want to,” said Jessica. “It comes from a truthful honest place.”

Her ease on stage comes from the fact that Jessica’s a singer off camera as well. She tells us over the hiatus she finished her first album.

Between filming and recording, Jessica doesn’t have much time to focus on men, but the single star did say what she is looking for.

“Integrity,” said Jessica. “Someone who’s funny and honesty. Someone who can make you laugh, that’s key.”

Too bad Matt Lanter’s got his eye on Julianne Hough, he seems like a real jokester!