The friends that tattoo together…stay together? Check out Vanessa Hudgens and Ashley Tisdale’s new tattoos!

Vanessa Hudgens has tattoo fever—and she passed it to her BFF Ashley Tisdale. In February of this year, 22-year-old Hudgens visited the tattoo parlor East Side Ink in New York to get a butterfly on her neck. She went back to the tattoo parlor last week – -and brought Tisdale with her! 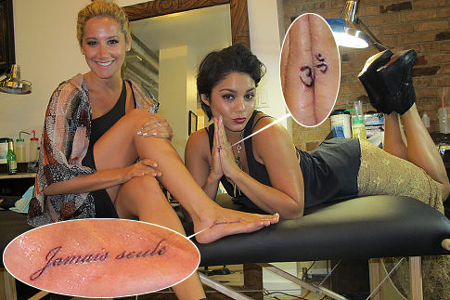 Tattoo artist Bang Bang (who also happens to be Rihanna’s tattoo guy) inked the symbol for ‘Om” on Hudgen’s hands. Each hand has half the symbol, so when her hands are clasped in the prayer position (like she is doing in the above photo), the symbol is complete.

We’re not surprised Hudgens went back for another tattoo, since she told David Letterman that she felt like “a badass” after getting her first one.

Tisdale, who was in town with Hudgens for Fashion Week, had “Jamais seule,” tattooed across her foot, which means “never alone” in French. The 26-year-old actress also has “Believe” inked down her back and “Fearless” on her wrist.

Tisdale said that this is the first time she got a tattoo without her mom.” With my tattoos, my mom went with me,” she said. “The ‘believe’ tattoo is because my mom always told me to believe.”

Tell us: What do you think of Vanessa Hudgens and Ashley Tisdale’s tattoos?