Ashton Kutcher has made his singing debut in the Charlie Sheen-free opening of Two and a Half Men. Watch the actor as he takes center stage and belts out the famous tune. 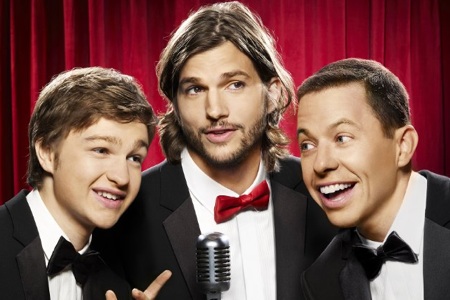 CBS recently released the show’s snazzy new opening and it’s everything you’d want and more. The clip is short and sweet, but Kutcher still manages to ham it up for the camera. We don’t know whether to be captivated or creeped out by his gaze. It’s hard to keep your eyes off of him.

So far, not much is known about Kutcher’s character or this season’s plot. But it’s been reported that Charlie Harper has been killed off and an internet billionaire named Walden Schmidt has bought his home. Considering the house comes with more than just furniture (Charlie’s family), we can imagine the comedy that will ensue.

Two and a Half Men returns for season nine on Sept. 19.

Will you tune in to watch Ashton Kutcher’s big debut?