Dr. Phil is back for a new season — and his first sit-down interview is with the parents of the notorious “tot mom,” Casey Anthony. 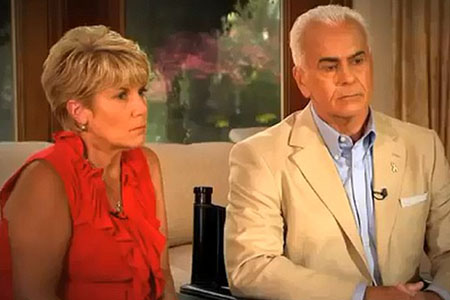 Dr. Phil pounds into the questions right away, giving Cindy and George Anthony no sympathy for the role they played in Caylee Anthony’s disappearance and death.

“My Caylee is missing. She came into my life unexpectedly just as she has left me. Jealousy has taken her away, jealousy from the one person that should be thankful for all the love, support and strength given to her,”Cindy Anthony wrote on MySpace, 12 days before she reported Caylee missing.

However, Cindy said Caylee wasn’t missing “in a literal sense” at that point.

“Caylee was missing in my heart that day. She wasn’t missing physically, in the sense, because I thought I knew where she was at,”she said. “I wanted [Casey Anthony] to know how much she was hurting me. And I thought that she was purposely keeping Caylee away from me.”

Dr. Phil then asked if they really thought the “death smell” in Casey Anthony’s trunk was from Caylee.

“Truthfully, to this day I don’t know. To be honest,” Cindy said.

“Do you want to believe Caylee was back there? I don’t want to believe it. But I’m going by what investigators have told me,”George said. “All I know is that Caylee’s not with us anymore. I know that.”

The Texas psychologist then asked Cindy if George hid information about Caylee’s death.

“No, not when it came to his family. George would never have put us through those six months of not knowing where she was because I watched him break his heart every single day and I watched how frantic he was,” she said.

Another revelation: The Anthony’s told Dr. Phil that Casey suffers from Grand Mal seizures that cause her to black-out. Is this an excuse they’re making for their estranged daughter?

We’ll have to wait and see when Dr. Phil’s interview with Cindy and George Anthony airs Tuesday.

Watch a teaser for Dr. Phil’s interview with the Anthony’s