Remember a time long ago, before Tom Cruise jumped on couches, yelled at news anchors and did cameo roles with prosthetics? Yes, back in 1986, Tom Cruise was a sex symbol and the star of the film Top Gun. Well, we’re about to see a return to the ”danger zone.” Top Gun is about to be re-released in 3D.

A four minute 3D world premiere preview of the “Danger Zone” flight sequence was screened on Monday at the International Broadcasting Convention in Amsterdam today. 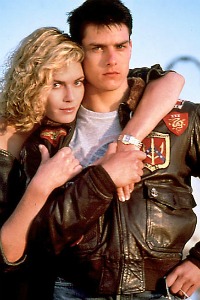 According to The Hollywood Reporter, the conversion is being done at Legend3D. CEO Rob Hummel made a few statements about the conversion. the clip as well as its unique business model during an IBC panel.

“We think there is great potential for catalog titles in 3D, but studios have had trouble justifying the expense,…As I understand it, they are planning to release it in 3D in early 2012, though I known [sic] they want to get Tony Scott’s approval before they go forward.”

He continued, “I think Top Gun lends itself to 3D due to the aerial flight. You can have fun with 3D by bringing things off the screen if they are not attached to the edge of the screen.”

It was previously announced that Titanic will be re-released in 3D as well. And of course, we all know Star Wars is getting the 3D treatment too.

Just think, ladies. No matter what you think about 3D, you know you want to see that volleyball scene in all three dimensions. Yeah, we can’t wait for that either. So what do you think? Do you want to see classic films re-released in 3D?