George Clooney opted to bring new gal Stacy Keibler to the Toronto International Film Festival. How did she do in her big ‘debut’?

Elisabetta who? The 33-year-old Dancing With the Stars stunner was far from ex-beau George Clooney’s mind when he stepped out at the Toronto International Film Festival with new girlfriend, Stacey Keibler, in tow. 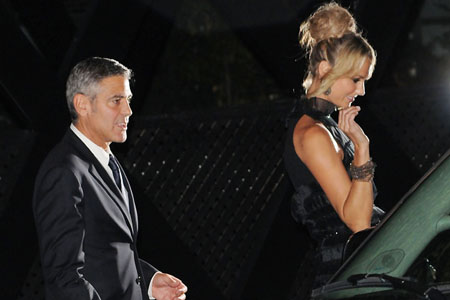 Clooney was at the festival to premiere his new film, Ides of March. Amazingly, the couple wasn’t coy about their relationship status.

“Everything!” Keibler told People when asked what she likes about her superstar boyfriend.

Keibler has one thing in common with Clooney’s ex lady, Elisabetta Canalis: both competed on Dancing With the Stars. That’s where the similarities end, though: Canalis admitted she was dependent on Clooney during their relationship; Keibler isn’t a shrinking violet.

“One of the recurring themes of the night was that Stacy had her own conversations going on and that she wasn’t following Clooney around like a puppy dog,” a source told US Weekly of Keibler at the Fox Searchlight, Belvedere and Vanity Fair’s Toronto Film Festival bash.

“She was confident in her own space,” added the witness. “She would come over to [George] and rub his back, then separate from him again… I’ve never seen him more comfortable.”

Canalis, on the other hand, wanted someone to sweep her off her feet.

“You have to accept that Prince Charming who is coming to save you is not going to happen — it works against you,”she told Italian magazine Chi earlier this month.

Former WWE wrestler Keibler can hold her own.

“They have good chemistry, and she can hold her own with the boys,” an onlooker told People. “They both can equally be the life of the party.”

Who do you like better for George Clooney: Stacy Kiebler or Elisabetta Canalis?