CW, the forerunner in the teen-angst division of television, has given a green-light to The Carrie Diaries, the prequel to the Sex and the City series written by Candace Bushnell. The series follows soon-to-be columnist and author Carrie Bradshaw as she struggles through her senior year of high school. 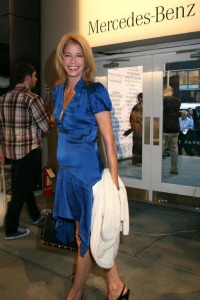 According to The Hollywood Reporter, the CW network is going to move ahead with a project based on The Carrie Diaries, a series of books written by Sex and the City creator Candace Bushnell.

The series follows Carrie Bradshaw before she became a leading women’s columnist and novelist, way back in the early 1980s, when she was still a teenager in high school.

Sarah Jessica Parker: Sex and the City not returning to TV>>

The project will be produced by Fake Empire, a production company headed by Josh Schwartz and Stephanie Savage. Schwartz has created many of the most successful shows on the WB, including The O.C. and Gossip Girl. He also co-created NBC’s Chuck.

The Carrie Diaries is a fairly new literary series, launched for the first time in 2010. The first book in the series delt with Carrie’s relationship with Sebastian Kydd and her problems with popular girl, Donna LaDonna.

Rumored cast of Sex and the City 3 movie>>

The second part of the series, which was published in April 2011, was titled Summer and the City: A Carrie Diaries Book. It revolved around Carrie’s first trip to New York City. The book series has been so successful that Bushnell has signed on to do two more installments.

CW is the leading network for teen-angst/dramadies on television, with a starring lineup of shows like Vampire Diaries, Gossip Girl and 90210.

Last month, Sex and the City producer Michael Patrick King stated to reporters at the Television Critics Association summer press tour that he would not be involved in any prequel to his hit HBO series. He also indicated that he wasn’t in favor of the story going backwards, instead of forwards.

He revealed, “My Carrie Bradshaw started at 33 and I took her to 43. I didn’t even want to know who Carrie Bradshaw’s parents were because I thought she only existed in Manhattan. So for me, the idea of going backwards and making her less evolved is something I don’t imagine doing.”