True Blood concluded its fourth season with a few deaths in Bon Temps.

True Blood— a finale to die for.

Fans have to wait a while before they get a new season of HBO’s True Blood, but the fourth season finale provided a few juicy moments we can live with. 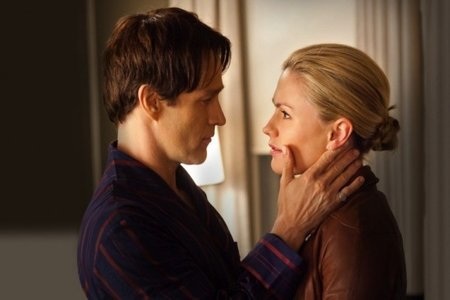 Check out what went down with Sookie (Anna Paquin) and the rest of the gang as we highlight the best moments of the True Blood season finale — we have to say, some were boring.

Marnie took over Lafayette’s body and managed to use it to take control of Jesus’ magic — and then kill him. Oh, snap! Yeah, that happened.

This prompted the body-taker to head off in the direction of Eric and Bill, setting off a burning revenge plot — by burning, we literally mean burning, Eric and Bill.

Holly, Sookie and Tara got all chanty in hopes of conjuring up some super awesome spirits for help. Marnie’s sister appeared, trying to reason with her, but it took Gran snatching Marnie’s spirit right out of Lafayette’s mouth to get things moving — yikes — and gross, all at the same time.

Phew, Marnie moved on to the other side and Lafayette was OK (don’t worry, people) — despite playing a part in killing Jesus. Jesus popped up eventually to release Lafayette of feeling guilt and pain.

Over in Love Land, Alcide opened up to Sookie and she decided to let go of both Eric and Bill after tons of forgiveness — oh, this girl! Kind of boring, actually.

Nan saw Bill and Eric, telling them she’s going on her own and wants them to join her plight. She rambled on about Sookie long enough to piss Eric off. He took out her guards, while Bill killed Nan.

And here’s the big bang moment — for us, anyway. Debbie paid Sookie a visit with a gun in hand, aiming for her, but Tara threw herself in front of the gun — bang — Tara is really dead.

Sookie went ballistic and blew Debbie’s head all over the kitchen — another gross, yet superb moment.

What did you think of the season finale of True Blood?