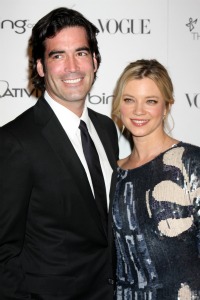 “He’s from there and my parents live there, so it’s been my second home since I was very young,” Smart told Us Weekly.

Smart donned a Carolina Herrera wedding dress as she was joined by eight bridesmaids for her walk down the aisle in front of 215 guests.

“We feel so excited and blessed to celebrate this happy day with our family and friends,” the newlyweds said.

Oosterhouse, the host of Carter Can and Red Hot & Green, met Smart at an environmental charity event last November. He popped the question just a few months later.

The groom first came to public attention as a carpenter on the hit TLC series Trading Spaces. The bride first raised eyebrows appearing on the big screen in a whipped cream bikini opposite Dawson Creek‘s James Van Der Beek in Varsity Blues.