Ellen DeGeneres and Portia de Rossi are proving you can work together even when you’re married. They’re getting set to team up with NBC on a new pilot. 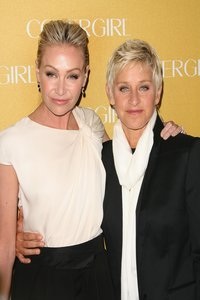 Ellen DeGeneres and wife Portia de Rossi are partnering in a completely different way. They’re taking on a new work project together.

Ellen DeGeneres and wife Portia de Rossi will team up on a new comedy pilot for NBC.

According to Deadline who first reported the news, DeGeneres and de Rossi have inked a pilot deal with NBC that will team the married duo with Samantha Who? co-creator Don Todd.

The pilot reportedly features “dueling sisters,” one of whom will be played by Portia de Rossi.

The untitled pilot was being courted by major players, with the peacock network snagging up the goods.

Portia De Rossi is known for her role in Arrested Development and most recently Better Off Ted. She’s fantastic at the subtle humor, so this will be interesting when she hits the four-camera comedy.

Will you tune in to see Portia de Rossi and Ellen DeGeneres make comedy magic? It would have been funny to see DeGeneres on camera but we can deal with this too.