Ali Lohan, Lindsay Lohan’s little sister, created a buzz when she was spotted out with what many thought was a completely new face! Did Ali undergo plastic surgery—or is she all natural? Her publicist speaks out.

Ali Lohan has always been known in the past as the cute, younger sister of Lindsay Lohan – however she was spotted out this week looking dramatically different, causing many to speculate she underwent plastic surgery. The aspiring model looked remarkably thinner and her face looked more angular and mature than in the past. 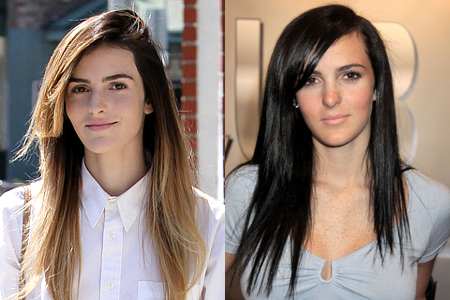 Her rep Steve Honig spoke out today, saying the 17-year-old’s changing looks are due to “normal teenage growth,” not plastic surgery.

“Aliana has never had any type of plastic surgery in her life, nor has she ever considered it. Her success as a model lies with her natural looks and she has no interest in changing that,” Honig says. “During the past two years, she has gone through a normal teenage growth spurt that has made her taller and slimmer. It has also slightly changed the composure of her face, all of which is typical of what happens to kids in their mid to late teens. It’s what most people refer to as the awkward stage. Ali is growing up, that’s all.”

Ali’s modeling agency gave a similar statement, saying they can “confirm” that she has not had any plastic surgery. “As a young girl who is growing up, it’s natural for her facial features to change slightly, and we see this with many of the younger models we represent. Aliana is a beautiful 17-year-old girl who is growing into her face and body, as is the norm for someone of her age.”

True, but simply plucking or waxing your eyebrows in a new shape could also make them look higher.

Another plastic surgeon, Dr. Alex Karidis, says she may have had inject able fillers. “Ali has lost a drastic amount of weight which has exaggerated her jawline and skeletal features,” he said.”She looks like she’s had injectable fillers in her cheekbones as they are lot more defined now. It would be a quick and easy procedure to do especially if she wants to enhance her features as a new model.”

Tell us: Has Ali Lohan had plastic surgery or is she all natural?