With a new round of Sandra Bullock and Ryan Reynolds rumors circulating, Bullock smacks down the romance rumors. They’ve been “just friends” for over a decade, but with the age old debate of whether men and woman can actually be “just friends,” they’re back to defending. 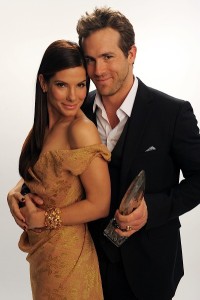 Sandra Bullock and Ryan Reynolds were romantically linked after spending New Years together earlier this year, but that doesn’t quite compare to having a gossip rag announce they’re making a baby! With the duo caught on vacay together last month, tongues are wagging, but Bullock has denied the claims.

“Ryan Makes Sandra Happier than Ever with A Baby at 47!” announced the cover of OK. That’s some headline, and the cover story went on to reveal Bullock is knocked up and in love, while Reynolds is signing to become adoptive dad to her 19-month old cutie, Louis.

More rumblings about the pair taking their friendship to the next level, being inseperable or just being spotted together emerged along with the requisite denials from yet more unnamed sources.

As SheKnows often points out, one should be careful of falling under the spell of unnamed sorcery, but fans would love to hear this unlucky in love pair found love together. Not only did the American sweethearts have fun chemistry in The Proposal, but just look how good they look together!

Plus, 2010 was a rough year for the old friends, with Bullock refusing to be taken down by the Jesse James cheating train, while Reynolds divorced Scarlett Johansson after only two years of marriage.

Luckily, Bullock has spoken out for herself, albeit through Entertainment Tonight. Bullock told ET that she is “not romantically involved” with Reynolds. “She is not pregnant and has no plans to adopt another baby at this time,” presenter Samantha Harris added during the show.

It seems as much as fans and media outlets would love to see these two paired, it’s just not in the cards.

Are Justin Timberlake and Jessica Biel friends with benefits?