Tori Spelling is nearing the end of her third pregnancy, which she says is the toughest yet. After baby arrives she’s already got plans made — and they involve food! 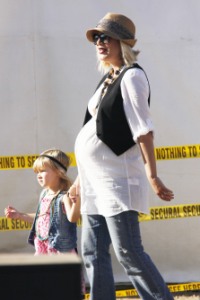 Though Tori Spelling is a seasoned veteran of motherhood, her third pregnancy is proving to be the toughest. As she awaits the arrival of baby number three, whose gender will be a delivery room surprise, Tori shares what she’s been craving this summer and the first thing she’ll order after baby is born!

As for cravings, the 38-year-old actress says she’s been eating “a lot of avocados” and “a lot of fruit,” as well as devouring what Dean’s been cooking up in the culinary school he’s attending.

“He’s been cooking every night,” Tori brags. ” Homemade pastas! Right now he’s in his pastry course, so he’s making fresh croissants. I reap the benefits of his hard work!”

There’s one item Tori’s been holding off on however — sushi. “I can’t wait to have sushi again,” she says. “You can’t really have sushi when your [sic] pregnant.”

Best wishes to Tori Spelling in the final weeks of her pregnancy!