Lady Gaga gave an emotional interview regarding 9/11 to DC’s Toby Knapp about her experience on the day of the tragedy. It is one of the most moving interviews you will ever hear Gaga give. 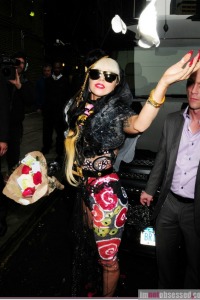 Lady Gaga has never been one to shy away from public exposure. Her life has been an open book. But the one thing she has never talked about at length was her experience on the fateful day of 9/11 when she feared for her mother’s safety.

Gaga revealed that she was in school in Manhattan on that fateful Sept. day. Her mother, Cynthia, worked across the street from the World Trade Center. It took Gaga (real name Stefani Germanotta) and her father several hours to confirm that she hadn’t been harmed when the buildings collapsed.

Revealing for the first time, Gaga told, “I watched the towers fall from the roof of my school with my girlfriends. The whole city was covered in ashes. My dad picked me up and we couldn’t reach my mom for ten hours. There was a television playing, we were all crying in the room. We went to the playground on the roof and the teachers were angry. We watched the towers fall from the roof because in New York, you could see them from any roof they were so big. I remember we were all crying. I remember leaving the school with my dad because we couldn’t reach my mom. We saw all these guys from wall street covered in soot and all you could see was the water from their eyes from their tears.”

Gaga also spoke about Osama Bin Laden’s death, and said it was a “historical moment in the fight against hatred”. She also backed that up with the fact that although he was so feared, no one should rejoice in the death of anyone.

Gaga, along with Nas, DJ Pauly D and other celebrities recently took part in a series of public service announcements to commemorate the 10th anniversary of the events of Sept. 11. The campaign is currently running through Sunday.