Dexter is back for a sixth season and guess who’s dropping by? Read on to find out!

Was Dexter missing from your life? 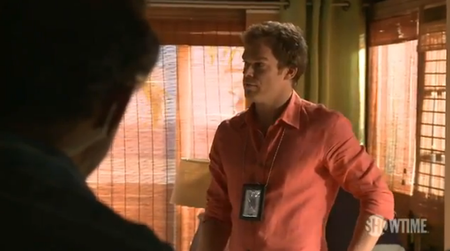 The sixth season of Dexter‘s will kick of on Oct. 2 and there will be plenty of blood to go around.

While there isn’t much chatter as to what the sixth season will bring, we do know a bit about the famous new faces that will be gracing the Dexter canvas with Michael C. Hall.

Showtime has revealed Colin Hanks, Edward James Olmos, Mos and more will be a part of the sixth season and David Nevins (Showtime’s President of Entertainment) , said, “There’s going to be some things that happen over this season of Dexter that can change some of the DNA in the show. As a programmer, I believe in change. I’m not scared of change. I know where they’re going this season and have some sense of where they could go in subsequent seasons.”

That’s a whole lot of Dexter to look forward to. Check out a preview and spy all the fun guest stars…

Will you be tuning into Dexter’s sixth season for a bloody good time?

Who do you think will be Dexter’s “ally and who will end up on his table?”