Love isn’t always what it seems for Snooki, Ronnie and Sammi. Relationships that were once based on trust and mutual resepct are tested time and again, and dysfunction rules as the roomates try to stage a love intervention.

Everyone’s still feeling the repercussions of the high drama that has surrounded the Jersey Shore cast while in Florence, Italy. Friendships are being put to the ultimate test, confrontations continue and frustration comes to an all-time high. At least we had Pauly and Vinny to keep us laughing! 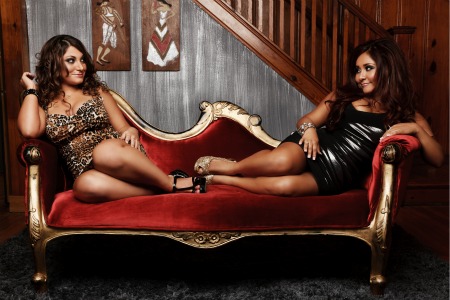 The episode started with Mike still having a pity party from the injury he sustained in the previous episode. He continued to mope around the house, feeling sorry for himself. It took Ronnie, of all people, to bring Mike to his senses and have him come out of his funk.

Ronnie and Sammi (who everyone is tired of watching and hearing at this point, including the roommates) have hashed out their problems once again. Ronnie whines, Sammi whines. They yell, they accuse, they belittle, basically, they are perfect for each other. So if they would just be quiet for five minutes and stay away from any and all alcohol, they would have the perfect relationship. They have decided to stay together again, for now…

Snooki continues to have trust issues with boyfriend Jhonni. Like the faithful girlfriend, she stays away from other guys and situations that would have her hooking up with someone, and calls him almost every day. He, on the other hand, is becoming more and more mentally abusive of her. His blatant mistrust of her, and his constant attempts to try and change her are not only wearing down Snooki, but the other roomates as well. Jenni, for one, has had enough. She said to the camera, “You don’t want a girl who parties, you don’t want a girl who drinks…You’re dating Snooki! I do not think Nicole should be with Jhonni if he’s embarrased of her. She should not be dating him.”

The roomates stage an intervention for Nicole, but she defends Jhonni’s actions, telling them that he loves her and this is his way. Even Ronnie tried to intervene in a heated phone call between Jhonni and Snooki by trying to cool him down and letting him know how much Snooki loved him. Jhonni dismissed Ronnie, which angered him even more.

Roger is coming to Italy to visit JWoww, and Jhonni is coming to visit Snooki in next week’s episode, so the interactions between them should set off some fireworks, as Jenni is fiercly protective of her friend.

Deena and Snooki exchanged some heated words with some girls in club Twenty One. One of the girls poured a drink on Deena’s head and they all began fighting. It all ended hysterically when the girls scooted out and Snooki and Deena were so enraged, they didn’t know they were fighting each other!

Mike half-apologized to Snooki for telling everyone they hooked up prior to Italy. He said he was sorry for upsetting her, but never admitted they did not get together as a couple.

Finally, the comic relief of a way too serious episode was when Pauly and Vinny decided to have some fun. Pauly allowed Deena to do his hair (he admitted he never lets anyone else touch his hair) and she styled it into a faux hawk. He then donned a tracksuit jacket and headband, as well as lots of chap stick, and pretended to be Joey D, a guido toolbag and apparently, like every guy JWoww has ever dated. Vinny wanted to get dressed up too, so he put on a tracksuit and a headband, became Louie, and the two of them came up with the mantra FPC, Fist Pump, Push Up, Chap Stick. The two really got into their characters and the roommates were hysterical over the antics.

After Vinny’s great acting skills in the latest episode, SheKnows has an exclusive about his acting career>>