The man who took viewers behind the scenes with The Social Network, The West Wing, Studio 60 on the Sunset Strip and Sports Night is getting back to the news room and back to TV, but this time Aaron Sorkin is taking on the cable news world. HBO has picked up his new pilot, a one-hour drama starring Jeff Daniels, Emily Mortimer and Sam Waterston that was previously titled More As This Story Develops.

With an Oscar for The Social Network in his pocket, Aaron Sorkin is back to writing for the small screen. HBO annoucned today that it is taking his untitled cable news drama to series. While news goups often get flack for their liberal or conservative biases these days, one can only imagine the team on Sorkin’s new show has higher objectives than money and politics, but that doesn’t mean personal drama won’t get in the way. 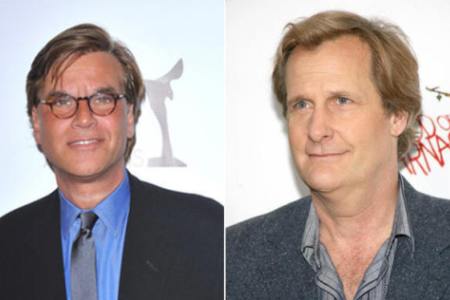 “The series centers on a cable news anchor (Jeff Daniels), his new executive producer (Emily Mortimer), his newsroom staff (Alison Pill, John Gallagher, Jr., Olivia Munn, Dev Patel, Thomas Sadoski) and their boss (Sam Waterston),” previews the HBO release. “Together they set out on a patriotic and quixotic mission to do the news well in the face of corporate and commercial obstacles and their own personal entanglements.”

News reporting, at its best, is supposed to reflect the black and white facts, but these days, both capitalism and political bias have cast a grey — or should we say yellow — shadow over the field. While the logline for the new series reflects the capitalist concerns journalists face, it doesn’t breach the political bias debate that has plagued news shows on channels like MSNBC, Fox News and CNN, where Sorkin went behind the scenes to do his research.

Yellow journalism is just the kind of thing Sorkin would take a stand against, but it’s not clear whether he will strive to create an altruistic news crew that is above the politics as well as the money, or if he will instead effort to paint a balanced picture of today’s news canvas from inside a decidedly liberal house, as he did in The West Wing.

With the new series set to go on HBO, there’s no word on a premiere date or how many episodes in the first season.

behind the scenes project