Jim Carrey was spotted over Labor Day weekend spray painting his West Village art studio. The actor has sort of explained what the graffiti means — and shares why he re-painted it after New York officials painted over it.

Jim Carrey was in the news early this week for spray painting what was originally reported his house with a colorful picture and the mysterious initials “F.F.C.” The Mr. Popper’s Penguins star took to twitter to explain it was actually his art studio, which he has dubbed “The Church of FFC.” 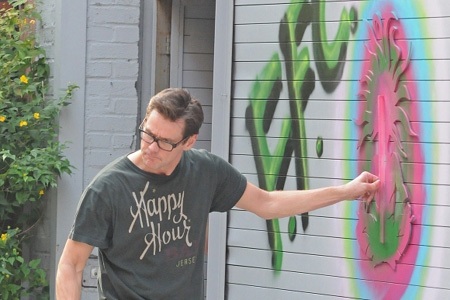 “In case u believe wht u read in papers n blogs, i did’t tag my house,” he tweeted. “It’s my art studio, a simple space where i can unleash my #Boing.”

His “Boing” was then painted over by New York officials who painted over the “street art” – and Carrey was not too happy.

The original picture was of a character he created named Baba, who he explains is a “mischievous deity … [who] exists in negative space.” He decided to paint the image back on, along with the words written in bright green spray paint, “This graffiti reapplied pursuant to …” with a picture of Baba and the initials F.F.C.

“This gentleman has a job to do,” he told TMZ of the city worker who painted over his original graffiti. “I’m just doing my job now as an artist and putting it back up. They can take it down again if they want to and it’s OK with me … I’ll even pay for it.”