Bloody fruit, sexy promos and pictures that tease us! We can’t take it anymore — The Vampire Diaries premiere is almost here! 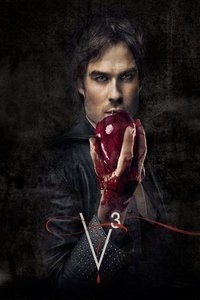 Did the oddly sexy posters of The Vampire Diaries cast holding bloodied fruit intrigue you? We’ve got more CW goods to satisfy your appetite!

The Vampire Diaries is kicking of its third season on Thursday, Sept. 15 and with a hybrid on the loose, Stefan (Paul Wesley) reverting back to his ripper days and Damon (Ian Somerhalder) being, well, Damon, no one is safe!

When The Vampire Diaries returns for its third season, Elena’s (Nina Dobrev) 18th birthday will be the focus, but with Stefan missing, it’s likely no one will be doing much celebrating — aside from Caroline who loves to throw a party.

Former 7th Heaven star, David Gallagher, will make an appearance as a new werewolf named Ray and it’s still unclear what Klaus’ intentions with him are, but we may know by the second episode titled The Hybrid.

The CW just released a steamy new clip that got us to raise our eyebrows. Check out the new “Appetites” promo and try not to freak out!

Keep checking back to SheKnows for previews, recaps and news on the vampalicious hotties of Mystic Falls.

Will you be tuning in for the season three premiere of The Vampire Diaries?