Uh oh! Looks like Ali Lohan might be going down the same troubled road as big sister Lindsay Lohan.

Budding model Ali Lohan was spotted out and about earlier this week sporting a drastically different look than we’re used to. The sister of troubled actress Lindsay Lohan sported a super-skinny frame and looked much, much older than her age (17.) 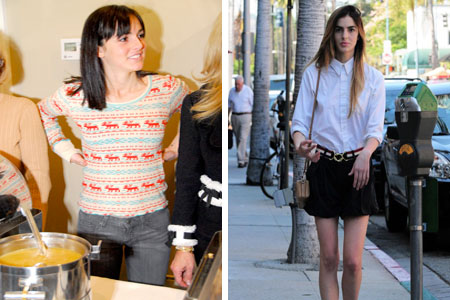 Of course, estranged father Michael Lohan had to talk to the press about it.

“It’s scary to see my daughter looking like this,” Michael told RadarOnline. “Ali was always on the thin side but seeing how much weight she’s lost there appears to be a drastic change that concerns me.”

“This industry has a way of having a harmful affect on one’s health and well being. To see what Lindsay has gone through is one thing, I certainly hope Ali isn’t going through the same thing,” he added.

However, Ali’s modeling agency doesn’t see it the same way.

“In fashion, Ali will set herself apart as a bona fide icon. One that fashion fans will follow not because of her famous last name, but because of the beautiful images and fashion trends she is helping create,” said Alexis Borges, Director of NEXT LA.

Honestly, she looks much, much older than her years. Other sources are claiming it’s because of her newfound love of Botox.

“It’s obvious to me that her eyebrows are higher than they were before,” Dr. Gary Alter, of Dr. 90210 fame, told RadarOnline.

There doesn’t appear to be much moment on her forehead, and she looks like she has had botox. Botox can actually raise eyebrows and get some of the wrinkles out.”