Rachel Zoe says she “cried for a week” when she found out she was having a boy. 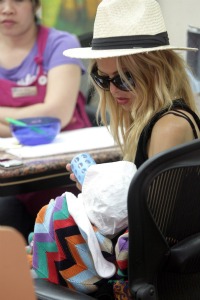 It’s the dark secret pregnant moms never talk about: Gender disappointment. Now a surprising celebrity is talking about her own experience with that moment when the sonogram revealed the news that her baby wasn’t the girl for which she had hoped.

“I always had this plan in my mind that I was gonna have this little baby girl,” Rachel Zoe said on The Rachel Zoe Project.

“I found out I was having a boy, and I did cry for a week. Or two. Maybe even three.”

There’s no doubt now that Zoe is gaga over her baby boy Skylar, regardless of the parts he has down below. She shows off the cutie pie whenever possible, and even brought him along for an appearance on Live with Regis and Kelly.

“I think as a lot of working mums say it’s very hard to wake up one morning and say ‘Ok I’m ready,'” Zoe said.

“But all of a sudden you wake up and say ‘I need to be ready’ and I wasn’t even ready until he was born and then the second he was born I was so blind, I was like how did I survive, what is life without this child?”