Miley Cyrus says she is not the “good girl gone bad” that the media likes to portray. In fact, she is just like every other 18-year-old, y’all. 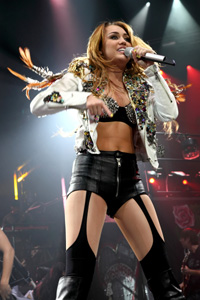 Miley Cyrus has had her fair share of controversy, including the smoking-salvia-with-a bong incident, the inappropriate lap dance video and multiple tattoos – but the 18-year-old former Disney star says it’s all par for the course of a normal teen.

“People see me as this perfect Disney star, and the moment I put out a record that says ‘I’m not 11 years old anymore,’ people look down on me. Every 18-year-old explores sexuality and experiments and tries things,” she told the Sept. issue of Prestige magazine. “For me there’s no reason to change that. You have to be true to yourself.”

Cyrus grew up in front of the cameras, starring on her own hit show Hannah Montana when she was only 13. Even before the show, she was used to the Hollywood life, as her father is country music singer (and her Hannah Montana co-star) Billy Ray Cyrus.

“There was this magazine article the other day, showing all the younger celebrities. I was the Girl Next Door or whatever, and I fell under the category of Good Girl Gone Bad. And I was like, ‘What the hell, man?'” “she ponders. ” I stay in the house pretty much every day. I don’t go out. I’ve had the same boyfriend for two years.”

The Can’t Be Tamed singer promises she is not heading down the Britney Spears head shaving path.

“I’m not some crazy lady who’s gone off the deep end, because I definitely haven’t. I just always try to be real.”