Dave Grohl discussed his comments about Glee with Chelsea Handler. 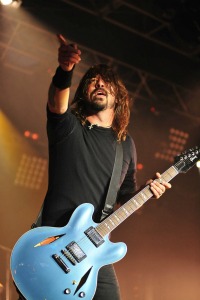 It’s no secret that Dave Grohl is no fan of Glee. The Foo Fighters frontman ripped Glee earlier this year, and now he’s talking to Chelsea Handler about his comments.

Grohl’s original comments stemmed from his astonishment that Glee creator Ryan Murphy badmouthed musicians for withholding permission for their songs to be used on the show.

“The creator of Glee, who I’ve never met — and I’ve really only watched about three minutes of Glee… I don’t watch a lot of TV — I read something where he was kind of mouthing off about some friends of mine in rock bands,” Grohl told Chelsea Handler.

Tell us: Are you Team Grohl or Team Glee?

Did Lea Michele get a Glee star fired?

Glee‘s season three promo: A dodgeball to the face