Kristin Chenoweth just can’t understand why loving gay people and being a good Christian have to be mutually exclusive. The actress spoke recently with The Advocate about her personal beliefs, sharing a lesson learned long ago from Grandma Chenoweth. 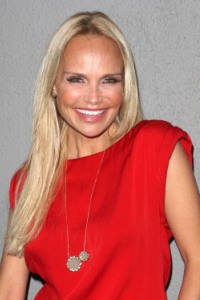 Kristin Chenoweth, a self-identifying Christian, has at times had to sacrifice for her beliefs. The actress, who is releasing her fourth studio album Some Lessons Learned on Sept. 13, has spoke openly about her support of the gay community — a move that caused her to be fired from a Women of Faith concert in 2005.

Despite that incident, which Kristin Chenoweth describes as the saddest moment in her professional life, she continues on her own path of faith in which she isn’t afraid to get a little cheesy and ask, “What would Jesus do?”

“I read my Bible and I pray and all of that — I really do. But at the same time, I don’t think being gay is a sin. Period.

The short end of the story:

“I always use this as an example: What would I do if it was a sin to be short? That’s the way God made me, so what could I do? Let’s see, I could wear heels, I could tease my hair, and maybe on a good day I could be 5’1″. But the bottom line is, I’m 4’11” and that’s the way I was put together. And that’s what I believe about homosexuals. And I love, love that this has become a purpose in my life. It’s one that I didn’t ever expect. ‘What would Jesus do?’ That’s my answer.”

A lesson from Grandma Chenoweth:

“My Grandma Chenoweth told me something when I was growing up. My [gay] best friend — I’ve talked about him many times, his name’s Denny. I asked my Grandma Chenoweth, ‘How can it be that he’s going to hell? I just don’t think that correct.’ And she said, ‘Well, Kris, I read the Bible like I eat fish: I take the meat, and it serves me well, but I don’t choke on the bone.'”

Visit The Advocate for more with Kristin Chenoweth!