Want your food served up by Zac Brown Band? 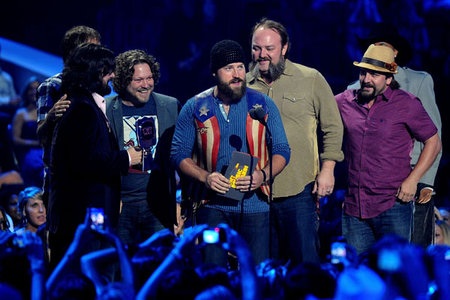 Zac Brown Band doesn’t serve up concert food to the fans who come from all over to see them play sold out shows. They treat the travelers to the very best food and it may just be coming to the small screen.

Zac Brown, lead singer of the band, alluded to the fact that he might be turning his appreciation for food into a television show. Why not? He does have a team of chefs preparing what Brown calls, “real, Southern gourmet,” to concert-goers.

Brown said of possibly doing a show centered around food, “We’ve talked about it.”

He added, “We’ve filmed a lot of the stuff, a lot of the cooking elements of our stuff to possibly put a show together, and we definitely will do that one day.”

Zac Brown Band treats fans to “eat and greets” and Zac said, “This isn’t just a chance for somebody to come eat a bag of nachos and some cheese wiz [sic] at a concert.”

As for shifting into a life in front of a camera rather than a stage, Zac Brown assured, “I think our lives in general are just pretty entertaining, or would be for most people. Getting that good content together and presenting it in a way…and putting it out there, there’s a lot of that to come.”

Zac Brown Band was just nominated for four CMA Awards and Zac Brown received a solo nod for the songwriter category. He could be racking up a lot of trophies by the end of the night!

Check out the 2011 Country Music Awards Wednesday, Nov. 9 to see if the Zac Brown Band walks away as winners.

Would you watch a show centered around a food-loving band like Zac Brown Band? Doesn’t it sound scrumptious?