Gossip Girl is going Hollywood for its Sept. 26 premiere and we’ve got a sneak peek! 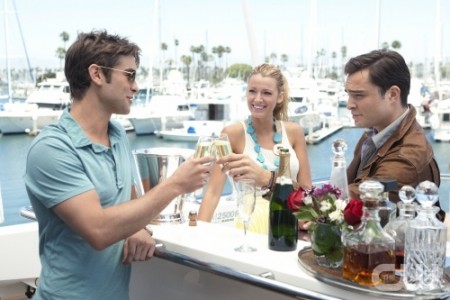 Season five of Gossip Girl premieres on the CW Monday, Sept. 26 and everyone is soaking up the sun — in Hollywood.

Why wouldn’t the cast head there? It’s a known fact that “everyone in Hollywood reinvents themselves.” At least, according to Gossip Girl.

While Blair is in wedding planning mode and sending out her save the date cards, Chuck and Nate will be getting their kicks Hollywood-style.

Speaking of Nate, it looks someone is going to find themselves an older woman (Elizabeth Hurley) to “destroy” a bedroom with. He’ll also become “that guy from that movie.” So many women, so little time for this guy.

Best line in the trailer: “Los Angeles is a plastic surgery layover, not somewhere you live.” Check out a preview and tell us your thoughts…

Gossip Girl will hit a landmark 100 episodes in Jan. and executive prodecer Joshua Safran assured, “We want to honor the [fact] that it’s the 100th episode.”

He added, “We know that we are very lucky to be coming by it, and we’re going to respect that. So we definitely want to make it feel like it is a special event. Let’s put it this way – it’s not going to be a clip show.”

Season five premieres Monday, Sept. 26 only on the CW. You don’t want to miss the fun.