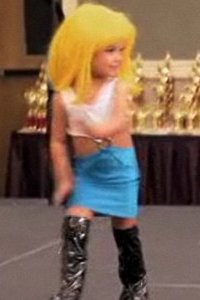 TLC’s Toddlers & Tiaras has had its share of cringe inducing moments since debuting in 2009. The series features overbearing stage moms slapping everything from acrylic nail applications to spray-on tans onto their kids’ bodies in a quest for beauty pageant stardom.

Recently, T&T has upped the creep factor. Last week, a 4-year-old dressed as Dolly Parton, complete with fake breasts. Wednesday night, a 3-year-old will be dressed as Julia Roberts’ prostitute in Pretty Woman. Young Paisley will be seen in thigh-high black boots, a white tank top, a tight blue mini skirt and big-blond blonde wig while she sashays across the stage.

The Parents Television Council is not amused.

“We have a serious problem when a network formerly known as The Learning Channel features a toddler, who probably hasn’t even learned to read, dressed as a prostitute showing off her sexy strut,” said Melissa Henson, director of communications and public education for the Parents Television Council, in a statement to SheKnows.com. “There’s no question, TV executives are complicit in robbing these small kids of their childhood.”

The PTC contends that dressing your kid like Julia Roberts’ “pretty woman” will be damaging later on.

“For years we’ve seen adult sexuality being inappropriately and aggressively foisted on innocent young children, but children today are being sexualized at younger and younger ages,” Henson said. “All available data suggests they will suffer for it later in life.”

TLC, which was formerly known as The Learning Channel, declined to comment.

A stage mom on the episode does provide some perspective in a teaser for the episode, which you can view below.

“Julia Roberts in Pretty Woman as a prostitute,” she says. “I would never ever do that to my little girl. Ever! Us pageant moms already take a huge rap for what we’re doing to our little girls and it’s outfits like that that give us a bad rap.”