Jersey Shore’s resident nice guy Vinny Guadagnino is ready to take his reality charm to the big screen and he tells SheKnows he’s already got some big actors backing him up. 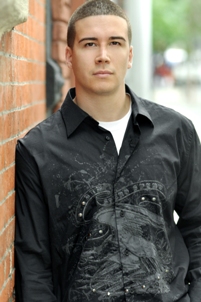 But unlike most Tinseltown newbies, Vinny already has a solid group of A-list talent he can turn to for advice.

“The other day I was hanging out with Seth Rogen and Jonah Hill,” says Vinny. “They were fans of me and thought I was really funny and that was a confidence booster. For these guys to call me funny…they’re like the funniest guys in the world. I’m really going to keep at this.”

And when he does start landing roles, Vinny knows just whose career path he’d like to follow in.

“I’m a big fan of the way Mark Wahlberg did it,” says Vinny. “Adam Sandler also started off on MTV on some silly show, sound familiar, and then he transitioned that into a full-fledged career. I really like the way these guys prove that you can do it.”

Though he may not be a Hollywood heavyweight just yet, Vinny tells SheKnows he keeps himself camera ready at all times.

“I am always about staying fresh and I literally get my haircut every couple of days,” says Vinny. “My hair grows fast!”

He also stays in shape outside of the gym by keeping active.

“I go out every day and play basketball, tennis, golf, and I run,” Vinny tells SheKnows. “Sometimes hitting the weights gets a little boring.”

Vinny’s even been dabbling in some very L.A. eating trends.

“My sister is a vegan and I eat a lot of vegan foods,” says Vinny. “I try not to eat a lot of processed stuff and stay as clean as I can. I do eat chicken and some types of meat but I like [vegan] foods because they’re so natural.”

Sounds like Vinny will fit in just fine when he makes it to the A-list!

For now you can catch him and the rest of The Jersey Shore cast every Thursday on MTV at 10/9 c.