Christie’s is auctioning off key pieces from the jewelry collection of Elizabeth Taylor.

Have a spare $3 million laying around? Why not spend it on a humongous diamond ring made famous by none other than Elizabeth Taylor herself? 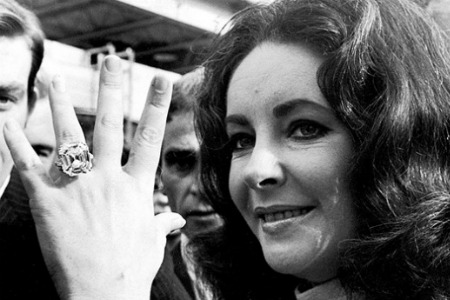 Earlier this year SheKnows reported the news that Elizabeth Taylor’s jewels are going up for auction, and now we have more details on the baubles you could get your hands on — if you have an AmEx Black card.

First up: A 33.19-carat Asscher-cut diamond ring given to Taylor by the love of her life, Richard Burton.

“Elizabeth Taylor used to refer to it as her baby and wore it as much and as often as she could,” Christie’s jewel expert Rahul Kadakia told the Associated Press. The platinum-set ring can be seen in nearly every movie Taylor made after receiving it.

“Jewelry was a way of life for Elizabeth Taylor. They were her friends. She enjoyed wearing them and it gave her a lot of pleasure because they reminded her of the great moments in her life, the great places in her life,” Kadakia said.

Also for sale are historical pieces Taylor cherished, like the 17th century Taj Majal diamond pendant she received from Burton on her 40th birthday and a ruby and diamond necklace set with a pear-shaped pearl that was once part of the Crown Jewels of Spain Burton gave her one Valentine’s day.

“I never, never thought of my jewelry as trophies,” Taylor wrote in her 2002 memoir My Love Affair with Jewelry. “I’m here to take care of them and to love them. When I die and they go off to auction I hope whoever buys them gives them a really good home.”

Christie’s plans to auction 80 pieces of Taylor’s jewelry on the night of Dec. 13 and 189 more the following day while 500 pieces of the legend’s costume pieces will be sold online at the same time.

Can’t afford such an extravagance? You can still have a peek at them in person. Christie’s will exhibit the entire collection at their New York gallery Dec. 3-10.